Bordered by Lake Ontario and Collins Bay, Lemoine Point is 136 hectares of forest, field and marsh, with a spectacular waterfront. Many opportunities for recreation and nature appreciation are available in all seasons.

Lemoine Point Conservation Area was purchased by the CRCA in 1975 to preserve this significant piece of land for future generations. It is a very popular and heavily-used Conservation Area with more than 2,500 metres of shoreline on Lake Ontario. It is also the last large publicly accessible tract of wooded Lake Ontario shoreline in the region, making it of great importance both as a recreational and a natural area.

To help protect Lemoine Point and to make sure that all visitors have an enjoyable experience, please:

These rules are made under the Conservation Authorities Act Ontario Regulation 99/90.

11 km of trails cross flat to gently rolling woodland, field and marsh. Scenic lookouts and benches are located along the trails.

Handicapped accessible trails are available from the north and south parking lots.

Picnic tables, barbecues and washrooms are available at several locations. Permits are required for group picnics and may be obtained by calling (613) 546-4228 ext 222.

Is permitted on service roads and designated trails. See map for details.

A stone beach is located at the north end of the conservation area.

The deciduous woods are an excellent location for spring wildflowers. Many species of resident and migratory birds can also be seen in the area.

Handicapped accessible washrooms/privies are located at the north and south ends of the conservation area.

Special events such as walkathons and group picnics are permitted provided that they can be accommodated without damaging the natural environment of the Conservation Area.

A special permit is required from the Cataraqui Region Conservation Authority for these events or activities. This should be submitted to the CRCA at least two months prior to your event.

Lemoine Point Conservation Area has an interesting history. It’s changed hands numerous times since the era of European exploration, when it was part of the seigneury of Robert Cavalier, Sieur de la Salle. The land was seized from the French after the British won the Seven Years War in 1760. After the American Revolutionary War in 1784, it was awarded to the United Empire Loyalist Captain Johan Jots Herkimer. After Captain Herkimer’s death in 1795, his third son Nicholas, a farmer, inherited the property and held it till his death in 1809 when he was murdered in Bath by two blacksmiths. It then remained in the Herkimer family until the 1830s.

During the War of 1812, several cannons were planted on the Point in the expectation that the Americans might land there in an attempt to capture Kingston.

In 1836, the Point was sold to Captain William Lemoine, a retired British Army officer who settled here. After his death, the Point was inherited by his son J.W. Lemoine, a bachelor, who was killed in the winter of 1872 when his sleigh overturned on Collin’s Bay. The property remained with family relations until the 1910s, and by that time it was partly wooded and partly a farm with a large stone house and other buildings, with a total of 2 1/2 miles of shoreline.

It is the Lemoine family that eventually gave us the Point’s current name.

In 1918, the property was purchased by William Hugh Coverdale. He was the son of a prominent Kingston family, and as a boy had actually been known to roam the Point. As an adult, he moved to the United States and eventually became a wealthy industrialist and financier, including building the Southern Steel Company into a very successful business and being a co-founder and president of Canada Steamship Lines. Thus his wealth enabled him, at the age of 47, to purchase the Point. It provided him and his family a retreat from his very busy life, especially for rest and recreation in the summer.

Shortly after buying the property and during excavation for a second stone house, several old cannon balls were unearthed, presumably remnants of the naval action of just over 100 years earlier.

When Coverdale died in 1949, and his wife in 1955, the property was inherited by their four children, who continued to summer at the farm.

Thus it is in large part the Coverdale’s use of the Point as an estate that enabled this natural site to now still be in our midst. The northern entrance road to Lemoine Point, Coverdale Drive, is named after the family.

In the 1960s and 1970s, various local politicians became interested in acquiring the Point as parkland. Although they ran into many roadblocks, including funding problems and OMB delays, they were eventually successful in 1975 in acquiring a large part (337 acres) of the Point on behalf of the CRCA.

An 88 acre section with the stone houses and working farm (the current Lemoine Point Farm) was retained by one of William Coverdale’s four children.

Thus was created the Lemoine Point Conservation Area, funded by the Ontario government, which provided two thirds of the cost, and by Kingston Township and the City of Kingston. A Master Plan was prepared in 1978 to guide the development of the area.

In 1999 a new Master Plan was developed, and it recommended that the Conservation Area be enlarged by the acquisition at some point of the Lemoine Point Farm, thus making it one large and magnificent urban “place of nature” accessible to all.

has two entrances; off Hwy. 33 at Collins Bay and off Front Road past the airport, Kingston. 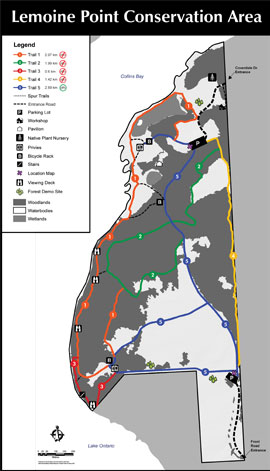 Events or activities with more than 30 participants require a special permit from the CRCA. Download a copy of our booking application form. This should be submitted to the CRCA at least two months prior to your event.

In 2011 the CRCA is beginning a climate change research project at Lemoine Point Conservation Area. This project will focus on forestry and the ability of tree species to adapt to climate change.

As part of this project we will be planting a test plot of Bur Oak and other southern hardwood species near the south (Front Road) entrance to Lemoine Point. Find out more »

Adobe Acrobat Reader opens the PDF files listed on this page and is available as a free download.